Dr. Johannes Coy first began exploring the relationship between the best natural foods and good health while researching new treatments for cancer at the German Cancer Research Institute in Heidelberg.

This led him to the idea that, if there were a way to starve cancer cells of these common types of sugar, while continuing to supply patients with energy via galactose for example, and other life-enhancing nutrition, treatments like chemotherapy would be much more effective.

Dr. Coy soon realised that nutrition was in fact the key to physical and mental health. He saw that the nutritional habits of the western diet were actually causing the major western diseases – including diabetes, coeliac disease, Alzheimer’s, heart disease and cancer. His aim then was to create foods that are not just therapies but are also preventative.

In 2006 Dr. Coy was awarded the Diaita Science Prize at Medica by the German Society for Nutrition and Prevention which honoured his exceptional scientific achievements in the area of cancer research, diagnostics and therapies.

Dr. Coy’s central aim has always been that his research and discoveries be used to improve well-being. He likes to stress that he doesn’t intend for his work to displace traditional medical therapies, but to make them more effective – and to enhance the health and vitality of not only patients, but the rest of us as well.

What is Positive Eating? 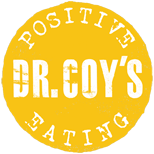 From this process of research and discovery, Dr. Coy’s idea of Positive Eating was born.

Our Positive Eating collection has as its centrepiece sublime chocolate and chocolate-covered fruit and nut treats and includes other foods such as coconut oil, coconut flour and an organic vegetable bouillon.

The Dr. Coy’s story is still growing. Not surprisingly, his collection of organic, gluten-free and lactose-free options are favourites of people recovering from cancer and people living with diabetes or coeliac disease. An exciting development, however, is that they have also been embraced by professional athletes, foodies, health-conscious parents, and healthy-eating aficionados of all kinds all over the world. His collection of foods and natural ingredients are all sourced and created with the intention of helping us all to have more vitality, feel better, and enjoy life more.

Click here to learn more about the special sugars used in Dr. Coy’s chocolate collection, the inspiring health benefits that come from them – and the professional athletes, healthy-eating fans and busy parents who love them and have felt the healthy difference!